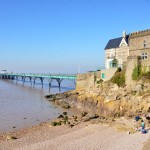 “A green and silent spot amid the hills,

No singing skylark ever poised himself.

The hills are heathy, save that swelling slope

Which hath a gay and gorgeous covering on, 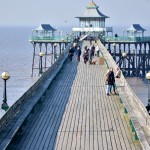 All golden with the never-bloomless furze,

Which now blooms most profusely; but the dell,

Bathed by the mist, is fresh and delicate

As vernal cornfield, or the unripe flax,

When through its half-transparent stalks, at eve, 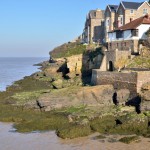 The above poems were written by the English Romantic poet Samuel Taylor Coleridge in 1798 while he lived in the Somerset village named Nether Stowey. He was fascinated by the beauty of the surrounding hills and loved hiking in nature reserves, where he was inspired by the beauty of the romantic scenery. Somerset‘s landscapes were enjoyed by the poet Alfred Tennyson, the writer William Thackeray and many others. Somerset Alleys meanders through coniferous and deciduous forests, heathlands, moorlands, and calcareous meadows. Deeply wooded valleys were named Poets’ Walk by inspiration of English poets and today these paths are part of the longest walking route in England over 1000 km long, called the South West Coast Path .

On the seven hills of Somerset, along the mouth of the river Severn, the longest river in Great 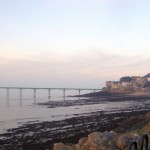 Britain, lies the town of Clevedon. The name of the town is derived from the old English word “cleve” meaning “cleave” and “don” meaning “hill”. The local Poets’ Walk was designated as a Nature Reserve and is now a popular footpath and tourist attraction which starts at the beautiful Marine Lake in Salthouse Bay and ends along the cliff tops, offering breathtaking views overlooking the Bristol Bay with beautiful sandstone cliffs and beaches at the mouth of the River Severn as it spreads into a wide estuary. On a clear day you can enjoy great views across the Severn Estuary to the coast of Wales and islands of the Bristol Channel. 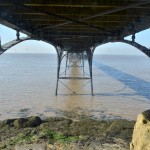 The alley leads north into Clevedon, where you can enjoy walking along the embankment of the town where a 312 m long pier grows out of the water on thin metal legs. It was opened in 1869 and now is one of the earliest surviving examples of Victorian architecture, when the town was an agricultural village and turned into a popular seaside resort. The poet and writer Sir John Betjeman described Clevedon pier as “the most beautiful pier in England”. The Royal Pier Hotel was built in 1823 originally known as the Rock House was converted into luxury apartments after a fire in 2003.

Pebble beaches in the old harbor are washed by the Severn estuary, with some of the highest tidal ranges in the world up to 15 m, second only to the Bay of Fundy in Eastern Canada. The geology of rock, gravel and sand give the water a brown colouration. The shoreline at Clevedon is a geological site of special scientific interest. A small cliff on the beach contains many minerals such as “Haematite” “Pink barite” “Pyrite” and “Copper sulphides” some of them are unique and unusual for this region. 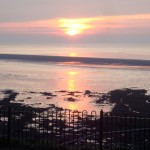 You can walk for half a mile along the waterfront passing ornamental gardens, bowling greens, tennis courts and be astonished with the stunning scenery of the bay. Public houses along the promenade offer great balconies from which one can sip a drink while enjoying the beautiful sunset. It is better to visit Clevedon on a clear sunny day so as to enjoy the sunset and witness the crimson light sinking in the waters of the estuary, giving pink-red hues to the blue-gray sky, reflected in the mirror-like water element. A fairy tale never to be forgotten easily.