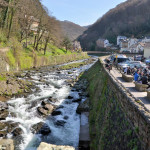 The famous English artist of the 18th century, Thomas Gainsborough spent his honeymoon there with his bride. He named Lynmouth the most delightful place for the landscape painter.

In fact, the best place for an artist could be most of Exmoor, where Lynmouth is situated. Exmoor is a National Park in South – West England, occupying an area of about 600 km², part of an ancient 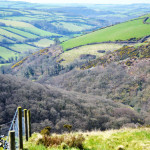 royal hunting forest. The name Exmoor is derived from the name of the river Exe that runs through it.

On the Exmoor coast, there are some of the highest coastal cliffs in England with a height of more than 300 meters. One can view the delightful seaside landscape with waterfalls, ravines and cliffs by travelling along the South West Coast Pass, one of the longest national trails in England and Wales stretching to 1014 km. Beginning at Minehead, it runs along the entire south west coast. 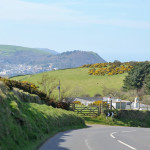 Exmoor Park, contains 208 scheduled monuments of national importance and 16 conservation areas, in 2005 it was named as one of the Seven Natural Wonders of Britain. The beauty of Exmoor is derived from its unique nature of coastal wastelands, swampy 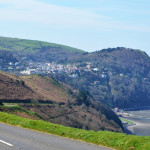 landscapes, primeval forest, overgrown lichens, mosses and ferns. Wild heather and mosses cover a quarter of the wasteland. Oak, ash, hazel and coniferous species dominate most of the forest. Two species of white beam tree are also unique to Exmoor. In addition, the highest birch in the UK grows in this forest. Several areas of the park are named as sites of special scientific importance due to their unique flora and fauna. 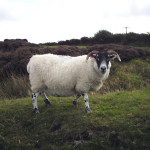 Exmoor ponies are one of the oldest breeds of pony in the world and may be the closest breed to wild horses remaining in Europe. Early in the morning on the hillsides and wastelands you can see red deer. In 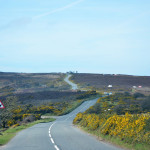 2010, hunters killed the largest animal of Great Britain, a red deer known as the Emperor of Exmoor, believed to have been 12 years old. Hunting for deer in the UK is officially authorized only to licensed hunters. Also there is a legend about the giant cat of Exmoor, although there is practically no documentary evidence.

Exmoor is mentioned in several literary English classics, such as Richard Blackmore’s “Lorna Dun” a romantic and fascinating love story of a girl from an aristocratic family and the Duns robbers. 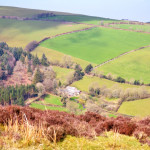 and far from each other. We once travelled by car through the forest and wasteland of Exmoor, we met no one except plenty of Exmoor Horns and Whiteface Dartmoor sheep as well as many cows and ponies grazing along the road, they were quite friendly, sociable and they did not run away when approached. 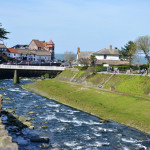 confluence of the West Lin and East Lin rivers. A geographical 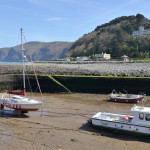 condition of the settlement is the reason for the constant danger of flooding. The last terrible flood happened when a storm raged in August in 1952, the rainwater merged into the village and the river overflowed into the streets. More than 100 buildings were demolished, bridges were destroyed and cars were washed into the sea. After this catastrophe, the village was rebuilt and the necessary outlets for floodwaters around the village were created.

Lynmouth is always filled with tourists strolling along the main street or visiting small boutiques, 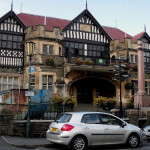 cafes and antique shops. On sunny days people sit on benches by the water of the picturesque harbour eating fish and chips. This being the British national take-away, it is impossible to imagine a seaside town or village in Britain without a “fish&chips” shop. 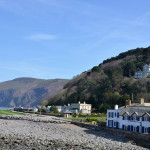 Lynton, located at the top of the cliff above the harbour at an altitude of 210 meters above sea level. You can also get there by car via a 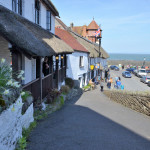 steep bendy mountain road. Lynton is no less a picturesque place, with some streets offering a delightful view of the harbour and the Exmoor lands. One of its most beautiful buildings is the Town Hall, built in 1900 as a gift from Sir George Newnes. Souvenir shops with 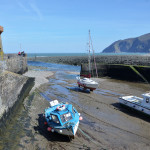 Spending a couple of days in these places is not only a visit into bygone days but also an enjoyable walk along the path of the Exmoor heartland.