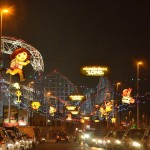 Blackpool in the northwest of England is a must visit place at anytime but especially in September/October, when one of the best light shows in the world takes place named the Illumination Festival. It sparkles and shimmers with a million bright lights, adorned with colourful decorations. Illuminated trams in various decorative states run along The Promenade, which stretches for seven miles along a strip of fabulous sandy beaches on this part of the Irish Sea coast. 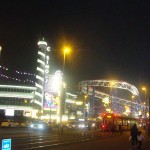 along the main street. Crowds of tourists 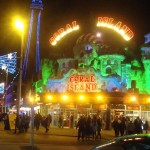 flood to the town every autumn to partake in this short holiday sparkle with many using small fantasy horse drawn carriages to ride up and down the brightly illuminated promenade which is flanked by amusement arcades, bingo halls, fast food restaurants and casinos. 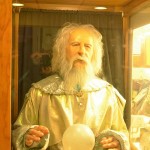 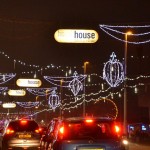 invented by Thomas Edison lit the town and were described as “Artificial sunshine” and in 1912, Princess Louise was the first Royal to visit the town and light up 10,000 bulbs, which started the Blackpool Illuminations. Today, this event has become an annual festival of light lasting 66 days.

Blackpool got its name from a drainage channel on a pit bog, which discoloured the water 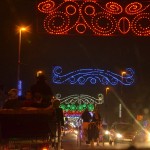 making it look black. The town became a sea resort in the 18th century because of its beautiful sandy beach, now called the Golden 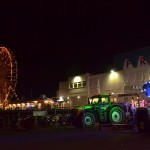 Mile. Wealthy Britons started to arrive by horse drawn carriages from Manchester and Halifax via a private road built by Thomas Clifton. With the development of railways the town became a holiday place enjoyed by people of all classes. Later, Henry Banks built the first row of cottages and the town began to grow and develop. Henry Banks is now known as the “father of Blackpool.”

By the early 20th century about eight million tourists visited Blackpool every year. Hitler did not bomb the town during the Second World War, as it was subsequently established through 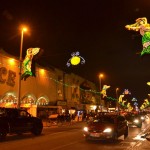 documents that, he wanted to holiday there after his conquest of Britain. After the war, the town flourished once again, when the middle classes and working families from the northern towns of England started to spend their holidays there once again. 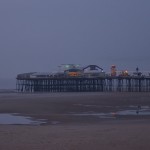 In the recent past, the development of tourism in Europe saw Britons preferring to holiday in foreign resorts. Nevertheless, it still remained one of the tourism leaders.

The Blackpool Illuminations are not the only reason for visiting this sea resort town. It is the only town in Britain with three Piers, built in the 19th century and are included in the entertainment and holiday industry of the town all year round.

In 1879 it was the first town in Britain and the world to have electric street lighting. 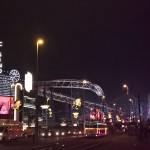 Also, Blackpool was one of the first towns in the world to install electric trams. The first electric tramway appeared here in 1885 and they are still running on the 11 miles track along the Promenade today. 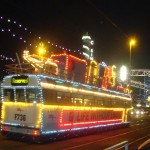 Blackpool is one of only three towns in the world to use double Decker trams. There are various types of trams, there is the open-top Balloon tram called the Cabriolet and the Boat tram with nautical decorations as well as many others and some trams have been built out of old engines and carriages from old decommissioned trams. During the festival, there is a tradition to decorate these trams with lots of lights.

Another attraction is the Pleasure Beach Amusement Luna Park with the fastest and tallest (65 metres) roller coaster in the UK named Pepsi Max the Big One.

There is also the Sandcastle Water Park, which happens to be the biggest indoor water park in the UK with some of the longest waterslides in the world. 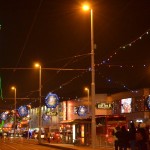 How can we forget the Blackpool Tower, at 158 metres it is one of 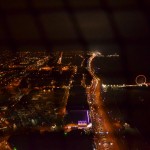 the tallest towers in Britain. The tower was built in 1894, inspired by the Eiffel Tower of Paris. It was a masterpiece of Victorian engineering. You can get to the top by lift in just one minute from where you can admire the panoramic view of the Promenade from two open balconies or stand on the glass floor for a breathtaking experience. Since 1920 the annual International Ballroom Festival of dancing is held in the now famous Tower ballroom.

In 1894 Blackpool had the largest theatre in the UK outside of London and was the first theatre in Britain to be illuminated by electricity.

Finally, The Winter Garden contains the largest Opera House in Europe together with restaurants and conference rooms, which have been attended by all British prime ministers since World War II.

Blackpool Sands is considered one of the most beautiful stretches of beaches along this coast, providing lots of fun for holidays all year round!