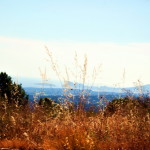 A territory in the south of France, inhabited by Celtic tribes, was 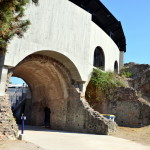 captured by the Romans 2,000 years ago and became a Roman province called Gallia, after the Gaul tribe who lived there. The name Provence derives from the Latin word “Province” meaning region. One of the towns built there by the Romans is also where Julius Caesar established his fleet in the natural harbor known today as the town of Frejus after the phrase “Forum of Julius“. 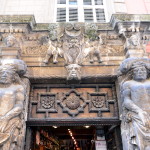 The area around Frejus is a natural picturesque landscape of rocky 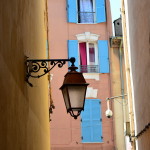 cliffs with a background of the Mediterranean azure sea. The town became a great holiday resort with its sandy beaches, yacht port, the ruins of many Roman buildings, including an amphitheater, which is now under reconstruction. Our morning started with a walk around the town 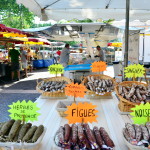 and a visit to the Roman amphitheater.

After our walk it was time for breakfast. The Saturday market was a real fruit paradise with apricots, melons, cherries and many gourmet delicacies of the Provencal cuisine, like sausages from smoked wild boar, figs, hazelnuts and of course herbs from Provence. A feature of Provencal cooking is to use fennel, basil, wild herbs, mushrooms and truffles which makes the local cooking delicate and unique. 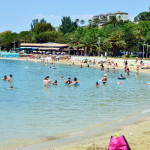 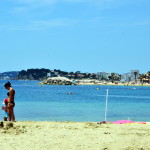 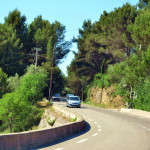 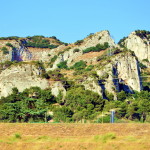 From Frejus, we drove on to Toulon, waving goodbye to the Côte d’Azur where we swam in the warm sea and relaxed on the beaches. Back on the mountain road DN8, this runs among rocks and pines, being the same road that we drove along two days earlier at night on the way to the Côte d’Azur. Once again we enjoyed the delightful fragrance of the pine aroma and the beauty of the rocky outcrops with a background of conifers. 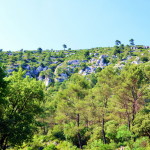 The City of Marseille is on the way from Toulon to Avignon. This ancient port was founded by the Greeks and in the year 2013 was named European capital of culture. Along with its historical landmarks, the hallmark of Marseille is the Chateau d’If, built in the 16th century as a fort. The French writer Alexander Dumas in his 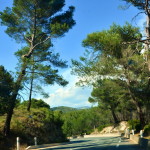 novel “The Count of Monte Cristo” in 1844 described a fictional story about the imprisonment of Edmond Dantes in the Chateau d’If. After this, the island with the castle became a popular tourist attraction. Unfortunately this mysterious and romantic castle will remain a dream for me, as we wanted to pass through Marseille as soon as possible, remembering our previous encounter in the area two days earlier. All that I remember from what I gleamed through the car window was, cheap housing occupied by immigrants among green thickets of trees all along the motorway. It was obvious that Marseille is gradually losing its French charm and is turning into a multi-cultural city. 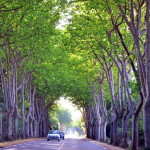 The Small villages of Provence along the D113 from Marseille to Avignon nestling among valleys of sycamore alleys are very similar to each other, essentially, all with the same type of buildings, rectangular geometric shapes embellished with metal balconies and windows decorated with coloured shutters. The character of Provence is that of a Mediterranean climate, made up of tender picturesque fields with olive groves, fields of sunflowers and lavender valleys. Their natural beauty gives them a unique atmosphere, which also helped to create famous paintings by great artists like Van Gogh and Cezanne. 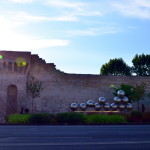 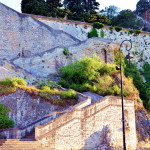 By sunset we arrived at the most romantic city in Provence “Avignon”. The Saint-Benezet Bridge over the River Rhone built in 12th century AD, commemorates the town with an old French song. In the old days, people gathered on an island under the bridge to sing and dance, and the song was “Under the bridge of Avignon” but since the island does not exist anymore this is now known as “On the bridge of Avignon” of which only four arches out of the 22 now remain. We drove along the fortress with its castellated walls built in the 14th century which are considered the most well-preserved fortifications since the Middle Ages, behind which lies a big city hidden from the outside, with narrow medieval streets where houses of different eras fit perfectly into the old architecture. 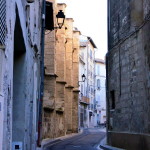 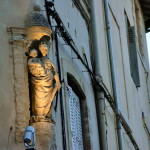 In ancient times, Avignon was the capital of the Gallic tribes. Emblem of the city is Avignon Cathedral from the 12th century built in the Gothic style (Notre Dame des Doms) with a gilded statue of the Virgin Mary. There is also the Palais des Papes founded by the Romans in the 14th century, where the Roman Pope lived when he fled from Rome. Many years ago, the city had a lot of churches and the French writer Rabelais called it “the ringing city”. There are still three churches left in the city built in a Gothic style but I guess the bell ringing is no longer so loud. 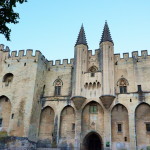 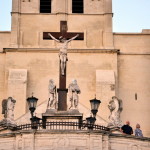 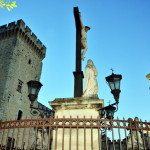 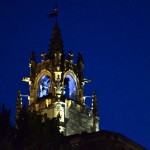 Just after sunset in the twilight, the city with its street lighting became more enigmatic and mysterious. We chose a very cozy cafe 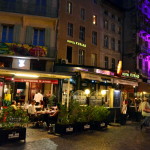 on the main square and became French Gourmands for a while with a huge platter of Moules and fries. The next day we planned a trip to Geneva in Switzerland Dijon, our next episode of the tour…