While reading a novel by Jerome K. Jerome “Three Men in a Boat” when I was young, I laughed again and again as I read what he had written and quoted in his funniest passages. The author describes the adventures of three friends on a boat ride along the River Thames; they started from Kingston-upon-Thames and followed the river all the way to Oxford in order to escape “a general disinclination to do any kind of work.” The whole adventure was described in the book with a subtle sense of humour. The book was published in 1889 and found incredible success and is still published today in many languages. If you haven’t read this novel, I commend you to read it as soon as possible: as you will derive incredible pleasure from the subtle and comic situations in it. 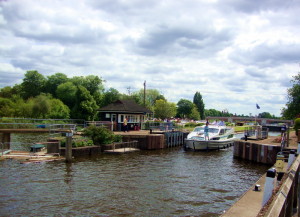 The events in the book are intertwined with real facts and some history of the river Thames. Jerome originally conceived the book as a guide to those wanting to know more about the river; hence all the sights along the river are mentioned in the context of a historical aspect. Thanks to Jerome, the Thames has since become very popular with tourists. Since those early years, the number of boats on the river has increased significantly and a day cruise on the Thames is almost a necessity and part of the life of many residents in the surrounding area. A large number of cruises are held daily all along the river for tourists and a lot of small private boats sail up and down it, of course the scenery and the boats no longer look as they did 100 years ago…

Many years after reading the story, I visited all the places along the

Thames designated by Jerome on his amusing journey, trying to imagine the book descriptions as I compare them to the present day. I believe the old streets of the towns have not changed much in one hundred years nor have any of the ancient buildings. But the atmosphere, the present inhabitants and neighbourhoods of these towns along the Thames are now another world and another way of life… 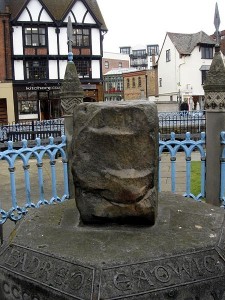 Kingston-upon-Thames was the first town where these three gentlemen started their boat cruise from. It is a historic town where Saxon kings were crowned in the 10th century. As the name suggests, there is a King’s stone, apparently not a very impressive one, unless you know the story behind it. Although, no one knows, if it is “the same stone” that was used a long time ago to crown the 7 kings in the town Church of St. Mary, which was destroyed in the 1730s. Later in 1850 the stone was removed from the ruins and mounted on a pedestal in the market

place and officially named the coronation stone with the names of the seven kings carved on it. Another attractive monument in this town I recently visited is a modern structure made up of red phone boxes removed from the Old London Road in 1988. “Famous” place in the town is the Kingston Hills, were guns installed there some years ago were aimed against the Martians in the novel “War of the Worlds” by Herbert Wales. Today Kingston is one of the districts of Greater London with commercial offices, shopping centres, modern architecture and lots of new housing.

The next town in the book by Jerome is Hampton-on-Thames. “It looks so peaceful and so quiet, and it is such a dear old place to ramble round in early morning before many people are about”. On the other side of the river is the lovely town of Molesey, also very attractive and peaceful. In the old days so many visited this part of the river that you could only see a brilliant tangle of

bright blazers, gay caps, saucy hats, coloured parasols, silken rugs and cloaks, streaming ribbons and dainty whites on the banks of the Thames. Today, the main streets of the town are full of little restaurants and antique shops, beautiful multicoloured cruise ships waiting in a queue at the Molesey lock. Only the “dark old Tudor palace” of Hampton court nearby looks the same as in ancient times.

When I approached the sculptures on the walls of Hampton

court, they looked very mysterious and fascinating. The Hampton Court Palace was originally built in the Gothic style for Cardinal Thomas Woolsey, then passed on to King Henry VIII, who became the most

famous Christian to be married six times. The history of this palace is perhaps associated with some of the most tragic events in the history of Tudor England. Henry VIII remains to me one of the horror stories of my childhood like the fairy tale of Charles Perrault’s “Bluebeard”. Two wives of Henry VIII were executed on his orders. The stories of ghosts still excite visitors and security people at the palace. In a special records book security guards registered some terrible evidence. In 2003, a video camera captured something strange, a spokesperson at the Palace admitted, that it was a figure that looked like King Henry VIII. The “ghost” had no human face. The Security officer added that “this is not a joke.” During the tourist season in the courtyard of the palace you can find a “real life” Henry the VIII, not a ghost but actors, you can also take part in the play and become a member of his entourage setting you in the atmosphere of the Tudor period.

Recent studies of famous people in English history by Professor Kevin Dutton revealed an interesting conclusion about Henry VIII that he was in fact a psychopath. Henry VIII takes first place among other celebrities in the category of outstanding characters. The purpose of the research was to prove that many of the characteristic of psychopaths are useful in certain areas. Probably the Tudor period would not have been so saturated with significant historical changes and reforms undertaken by Henry VIII if he was not a psychopath.

The Tudor Palace looks unusually beautiful, maybe because of its mystery. In King William III time new parts of the palace were added in the Baroque style. A mixture of styles makes it even more unusual. The interiors barely survived 500

years, but all the bits that did, create an atmosphere of past times seem very close. Tapestries, beds of Kings and Queens, thrones, wood carvings and a huge royal kitchen with a real fireplace and pans of enormous sizes were really impressive.

Jerome K. Jerome describes a visit to the green maze in the picturesque park of Hampton Court when he wandered in it for a long time before he found the way out. Still being called the biggest labyrinth in Europe, it did not look too large to me, in fact. It’s impossible to get lost in there with positive signs of how to get out..

Perhaps, only one day is not enough to explore all the rooms of this palace and get to know all it’s history and definitely not enough time to enjoy the walks around the many facets of the park. But it’s time to hit the road with Jerome in my next review with the town of Windsor and it’s magnificent castle. 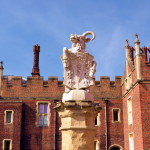 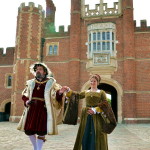 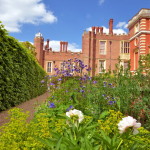 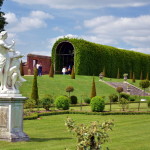 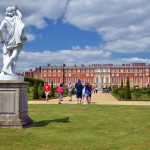 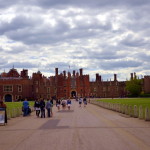