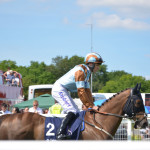 Ordinary people all over the world enjoy horse racing, for many years, a favourite sport for Kings and the aristocracy. The first records of racing horses date back to 1000 BC in India. The start of 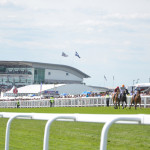 horse racing in England, took place in 1309 and mass races were first held in 1776 in Doncaster, where grand stands were erected along the racetrack for the visitors. The event was named “St Leger” in honour of the army officer and politician Anthony Saint-Leger who developed the sport. Since then, every year in September, competitions for three-year old stallions at a distance of 2937 meters have been held. The Doncaster Cup is the oldest prize in the world. 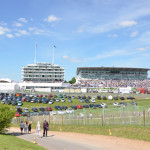 The “St Leger” inspired a number of similar events around the world.

The Derby competitions are held annually in early June, not far from 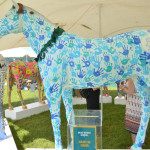 London near the village of Epsom, the second oldest of the five classic races after the “St. Leger”. In 1779, Edward Smith-Stanley, the 12th Earl of Derby on the occasion of his wedding decided to organise horse racing on his estate named “The Oaks”. The overall winner of these races was Bridget, a horse that belonged to Lord Derby himself. The races at Epsom became one of the leading events in the British calendar and have been named after Lord Derby.

Last weekend, I visited the Epsom races. These are slightly different from the competitions held at Ascot, which are traditionally visited

by the Queen. In Ascot, people and specially the ladies dress extravagantly in expensive designer clothes and participate in competitions for the most original hat. Every year the outfits become more sophisticated and some of them completely outrageous, giving the

impression that this is a competition of outfits rather than racehorses.

In Epsom, a huge area of the hill opposite the stands is reserved for the mass audience of ordinary English people who do not want to participate in the races for the best “dress code”. They come here 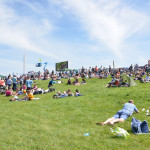 with their families, hold picnics on the grass, participate in the extensive Fun Fair nearby or walk around the huge shopping market and many snack bars serving take away food and soft drinks. Sitting on the hill one can very clearly watch the events taking place on the racetrack. Those that wish to actually be on the racetrack, buy tickets and reserve places on the grandstand, dressed in beautiful outfits with most of the men sporting top hats while the ladies arrive in elaborate head dresses slightly resembling ladies day at Ascot. 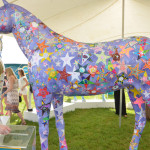 Most people who go there tend to make a bet or two. Winnings depend on the total amount of betting on the races. Sometimes if an 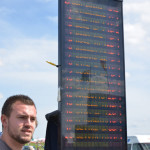 unpredictable outcome happens they can be very large. For example: if a horse, that is not favoured will have increased odds as very few people will bet on it, but if it does come in first the winner will benefit greatly. It is known that in 1995 the biggest prize of £153000 was paid out in Nottingham for a bet of only 5 pence. Most racehorse owners are extremely wealthy individuals, who take part in this sport for prestige and for the love of horses such as the Queen.