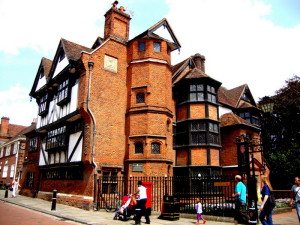 The real home of the chimney sweep is Denmark because this is where for the first time in history chimneys were swept in 1639 at the castle of the Danish King. This started a trend to clean chimneys all over Europe. In the United Kingdom, sweeps are highly respected in the town of Rochester, an annual celebration is held there in honor of the people from this old profession. Rochester is a great historical town, which grew from a small Saxon village. At various times, it was inhabited by Celts, Romans, Saxons and Jutes. In the year 43 AD Rochester was conquered by the Romans and later in 1666 AD the Normans invaded.

Rochester is a place where one can feel the atmosphere of antiquity as nowhere else. Buildings

from different eras abound every where, Tudor cottages bulging with age and crisscrossed with wooden beams are crowding the narrow streets, whilst Elizabethan brick houses can be seen round every corner. But most important is the lively atmosphere of the city. On the streets of Rochester you might meet a town crier in a red robe, white breeches, black boots and a tricorne hat, with a bell in his hand. In the old days, when not many could read and there was no radio, people heard the news from the town crier, but today this profession has become mostly ceremonial. 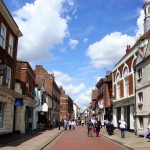 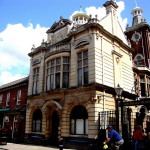 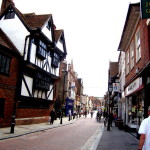 Rochester Cathedral is a most beautiful building which constructed by a talented architect called Gundulf who was not only Bishop of Rochester but he also constructed the Tower of London and Colchester Castle. In 1080 Gundulf began the complete restoration of the Church of St. Andrew, built in the year 604AD and turned it into today’s Rochester Cathedral. In 1090 AD Gundulf also built Rochester Castle on the remains of some old Roman stone fortifications. Because of its location on the ancient Roman road, the castle was of great strategic importance. In 1127 AD the castle was fortified and added to over the centuries and is considered one of the best preserved castles in England and France. 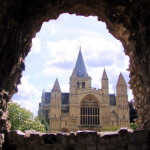 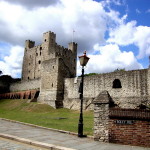 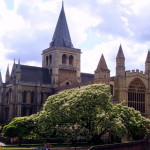 In 604 AD, when England brought in monastic education, the King’s School was founded at the Church of St. Andrew. After the reformation of Henry VIII, who dissolved the monasteries in 1541 AD, all schools in England have undergone many transformations. Today a school is part of the foundation of Rochester Cathedral and is one of the oldest schools in England and in the world second only to another school in Canterbury.

If you come to Rochester in early May, you can enjoy a beautiful English tradition called the Spring Festival, with lots of sweeps performing dances. Charles Dickens, who lived in this town for a long time, described the town in many of his novels, he also laments the lost tradition of the sweeps in his book called “Sketches by Boz”.

Thirty years ago, the sweeps festival was revived in Rochester, which had not been performed

According to an ancient legend, to meet a chimney sweep in the street is good luck. If you happen to touch the dirty chimney sweep or get smeared with soot it is even better. So, come and find your luck by visiting the town during the May festival.