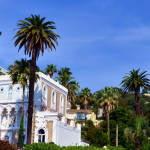 The Cote d’Azur on the south east coast of France is one of the most attractive destinations for travelers and a favorite place of sun worshipers. There is no debilitating heat; even at temperatures above 30C it always feels pleasant with cool flows of wind, flowing down from the Alps, at the same time the mountainous mainland protects the area in winter. Holidays on the Cote d’Azur are very popular among wealthy tourists. Nevertheless, no matter which hotel you decide to stay at in the city of Cannes, whether in the presidential suite, a low-cost apartment or simply visit on a day trip, you will feel the same joy in your heart whilst you are there.

The evening we arrived, we were immediately immersed in the atmosphere of Cannes, with its narrow restaurant filled alleys, lighted pavements and beautiful seafront gardens. 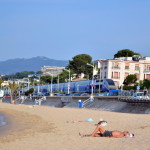 In the morning this sunny city is no less pleasant and affectionate, it 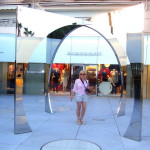 was great to wake up, open your eyes and see the azure sea in front of you everyday. Your first impulse is to jump in the water, splash the sea surface and experience that great feeling of being alive. Never forgetting to make a mental note of these pleasant memories, no matter where you are, in a green forest, in a tent on the shore of a lake or on a mountaintop. These experiences will help to fill your life with memorable moments that you will recall again and again.

We had our early breakfast with yoghurt on the beach and fed the pigeons and seagulls with crumbs of croissants. We then drove along the main promenade of the resort, the Boulevard de la Croisette, which is about 3 km long. At about 8 am the town begins to wake, some are in a hurry for business or work but most are tourists and visitors without any cares with summer bliss on their faces, strolling along the sun-drenched streets where a special atmosphere can be felt in any weather. This is a coast of contrasts; nowhere else have I seen such a number of very well dressed people, where else can you see women not teenagers dressed in mini skirts and high heels. Perhaps this is just my feminine observation but it seemed to make all the people ageless. It was wonderful to see young and old people, rich and poor, locals and foreigners enjoying a carefree sunny atmosphere. 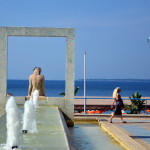 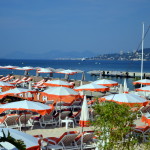 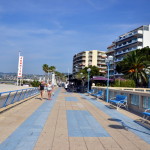 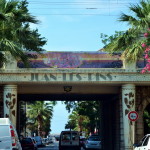 The next town was Juan-les-Pins, which I also did not feel like leaving. 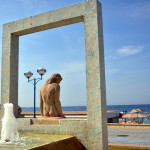 No wonder jazz musicians chose this town as their capital. Napoleon Bonaparte stayed here in 1815, after his detention on the island of Elba. Today, it is a great place for holidays with lots of activities, exquisite shops, white sandy beaches and parasols as far as the eye can see…

Between the towns of Juan-les-Pins and Antibes there is peninsula, where in 1857 the botanist Gustave Thuret founded an extraordinary botanical garden with tropical plants, known today as The Jardin botanigue de la Villa Thuret. 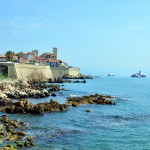 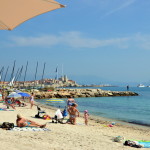 ancient settlement founded by the Greeks in the 5th-century BC and is now the second largest town on the Cote D’Azur after Nice. It is impossible to list all the famous people that have stayed here, a lot of writers and painters have created some of their best masterpieces here. Pablo Picasso painted 150 paintings during his six months stay in the Chateau Grimaldi, built in the 14th century by Prince Grimaldi of Monaco. The castle is now the Picasso Museum. 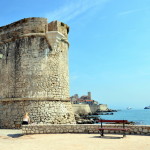 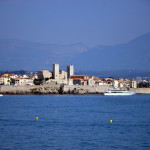 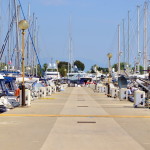 Antibes was once the most fortified town on the south coast of France, many landmarks have survived to this day, including Fort Carre, a star-shaped bastion built in the 17th century by Marguis de Vauban, whom I mentioned in a previous article. Antibes is also a favorite holiday resort for wealthy people from around Europe, who discovered its natural beauty, amazing and charming southern feel, white sandy beaches and one of the largest yacht ports in the area. Among the green tropical plants along one of the alleys next to the fortress, I discovered a huge bush of Aloe Vera, which was a positive giant compared with my little plant, which I have grown on the windowsill of my house. 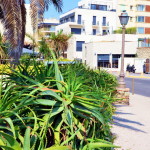 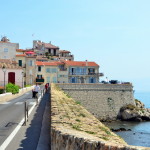 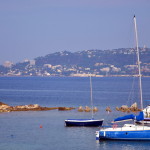 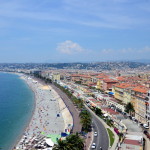 The next city we visited was Nice, called “Nice la Belle” which means Nice the Beautiful in sub dialect spoken in the city of Nice. If no other words can express delight, you can simply say, 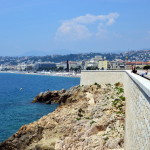 “beautiful!” The English word “nice” is “beautiful”, only the pronunciation is different. I do not know whether there is a connection between the English word “nice” and the name of Nice but the British certainly have contributed to the transformation of Nice into a first-class resort. Indeed, the main sea promenade is named the “Promenade des Anglais” in their honor. 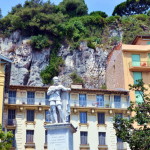 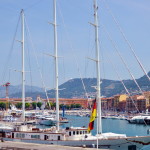 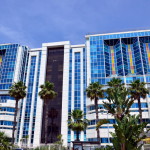 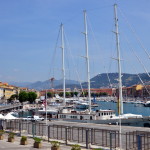 According to archaeologists who have unearthed artifacts in local 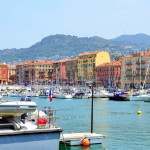 caves over a hundred years ago, intelligent life existed in Nice over 900,000 years ago. Ancient Greeks founded Nice around 350 BC and called the settlement Nikaia, after Nike, the goddess of victory. For many centuries the French kings tried to capture Nice from occupiers and it was only after the Treaty of Turin in 1860 that Nice was transferred to France. Soon after the English upper classes and a number of aristocratic families took to spending holidays there.

The city occupies a very large area of coastal promontory, divided on one side into a large 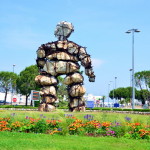 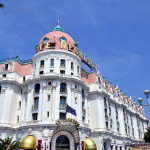 The city has many beautiful and diverse architectural styles, including 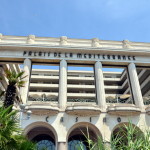 many museums, such as the Musee des Beaux-Arts and the Musee Matisse, as well as art galleries, churches and Cathedrals. Famous artists seeking inspiration came to Nice and some outstanding paintings, including the art of Marc Chagall, Henri Matisse, Niki de Saint Phalle, are exhibited in some of the world’s famous art galleries. A symbol of the Côte d’Azur built in a classical style is the Hotel “Negresco”, where since 1913 Harry Truman, Winston Churchill, John D. Rockefeller, Brigitte Bardot, “The Beatles”, Coco Chanel, Marlene Dietrich and many other celebrities have stayed. Each apartment has its own style and in the halls, rooms and restaurants, original works of art such as paintings, sculptures, tapestries and antique furniture can be found. Many buildings are associated with Russian history, when the royal family and the Russian elite came here for holidays and the Russian writer Anton Chekhov once jokingly called the city “The Russian Riviera”.

Unlike Cannes and Nice, which are cultural capitals in the south of France and are visited by representatives of the arts, film and literature, other towns along the eastern coast of France are more like a paradise for the rich…