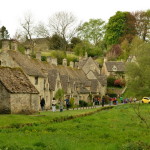 The Cotswolds in central England have been designated as an Area of ​​Outstanding Natural Beauty. The surrounding hills blend harmoniously into the rural landscape with cottages built of stone mined in this area which is formed by a Jurassic limestone bedrock, consisting in particular of fossilized sea urchins that created a rare and unique grassland. The color of this stone varies from golden yellow and honey in the north to the pearl-white colour in the south, particularly noticable in the city of Bath. Houses have been built from the local Cotswold stone since the middle ages. The rural landscape is dotted with charming stone-built villages most of which are listed as the most attractive in England. 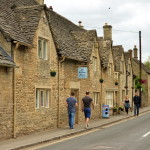 In the Middle Ages many Cotswold villages flourished due to the huge trade and production of wool. The revenues from this helped to build many beautiful churches and

houses as well as Palaces which became part of some aristocratic dynasties. I previously wrote about the beautiful village of Castle Combe. Bibury is a similar village on the River Coln and in 2014 the village was awarded the tiltle of “the most charming in Europe” a must visit note is strongly advised.
In a European miniature village located in Brussels, among the most beautiful reproductions of monuments from the European Union at a scle of 1:25, there is a model of the village of Bibury, one of six objects presented by UK. 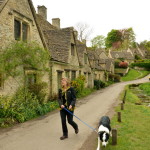 Arlington Row in Bibury on the banks of the river Coln was built in the 14th century as a wool store and converted into a row of cottages for weavers in the 17th, this is the 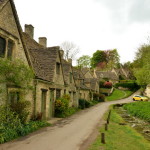 most vivid and pictorial scene photographed in the Cotswolds. They form part of the traditional venacular architecture and historical sites that are being preserved. Near the cottages there is a water meadow, surrounded on three sides by water, in the old days it was called the “Rack Isle” and is now inhabited by some unique species of water birds.

In this village there are two traditional English pubs where you can taste various dishes of the native Brown trout from the local Trout farm, founded one hundred years ago on the river Coln and the Bibery Spring. 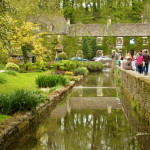 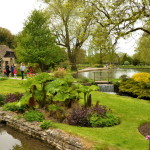 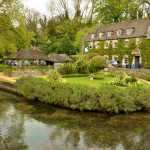 Japanese tourists became very fond of Bibury, after Emperor Hirohito stayed here during his European tour. On the day of our visit, we met many Japanese tourists as well as others from around the world enjoying the picturesque backdrop of Bibery.